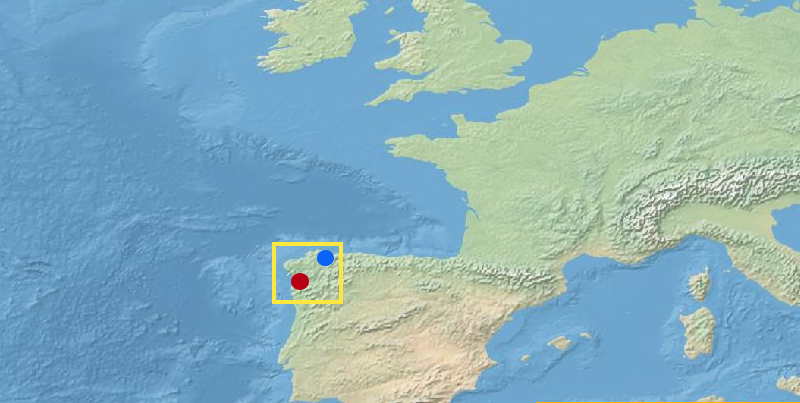 Harbor seals have been known at times to travel great distances, although they tend to be conservative about group haulout and pupping areas. Their movement patterns are not strictly described as "migrations", but predictable seasonal routes do exist, and one exists off the rocky shores of Galicia, Spain (within the golden rectangle on the map above). Here, regular monitoring from 30 observation posts by A Coordinadora para o Estudo dos MamÃ­feros MariÃ±os (CEMMA), headquartered in Pontevedra (red dot on map), has revealed that from time to time - especially during during the summer months - "some adult common seal specimen arrives traveling along the coast", according to a CEMMA report.

One such common/harbor seal hauled out at the RÃ­a of Barqueiro, north of the city of Lugo on 20 December 2011 (blue dot on map), and has provided this website with the first photographic evidence of Phoca vitulina this far south on the eastern Atlantic, although there have been occasional reports of sightings all the way down to Gibraltar. If such visitors run into difficulties in Galicia, there is skilled, experienced help at hand with an intensive care unit available for seals that arrive with health difficulties or injuries. Their website is available in Galician, Spanish, and English.

Begun in 1992, CEMMA is the lead organization for the regional Stranding Network (Rede de Varamentos) authorized by the Galician regional government, and which carries out rescues, rehabilitation, and releases from CEMMA facilities in association with the Galician Institute of Training in Aquaculture (IGAFA), the O Grove Aquarium, the Veterinary Hospital Rof Codina of the University of Santiago de Compostela in Lugo, and with the invaluable collaboration of CRAM ECOMARE and the Centre for Environmental and Marine Studies (CESAM) of the University of Aveiro in Portugal.

While their primary focus has been cetaceans, with up to 20 species having been identified off the Galician coast, Gray seals (Halichoerus grypus) and sea turtles are also regularly treated successfully. CEMMA stands ready for harbor seals in trouble (YouTube video) as well.

The western portion of Galicia has long been known as the Costa da Morte ("Coast of Death") due to the treacherous storms that lash this corner of Europe, and the catastrophic Prestige Oil Spill of 2002 did nothing to improve that image. Yet intrepid Galician sailors have fished these waters for millennia, and even though whaling is in their background it closed definitively in 1985, and many modern watermen support CEMMA's conservation efforts with donated fish for marine mammal rehabilitation and volunteer transport for at-sea releases (YouTube video).