Harbor seals have been hunted extensively throughout the eastern coasts of the North Atlantic, sometimes for food, sometimes for skins, and often to eliminate fishery competition. Nonetheless, the range of the subspecies Phoca vitulina vitulina has remained about the same in recent years except in the southern reaches and in isolated locations such as the Faroe Islands of Denmark, where they were hunted to extinction in the 1880s.

Despite periodic Phoca Distemper Virus epidemics, and Avian Flu outbreaks, the current population of harbor seals remains robust, and many well-informed, experienced European observers and researchers believe that "natural" processes are functioning well enough that the most crucial human input is close monitoring supported by sampling and tracking.

The images are presented here in roughly north to south order, with one photo - where available - from each of the countries where harbor seals are found. Images are still being sought from the Channel Islands.

The Svalbard Archipelago is the northernmost part of the Kingdom of Norway, located in the Arctic Ocean halfway to the North Pole. This image is from the extreme limit of the range of the Eastern Atlantic subspecies of harbor seal (P.v. vitulina), graciously provided by the same Danish photographer who has also shared his image of an Insular seal (P.v. stejnegeri) from Russia.
'Svalbard' means 'cold edge in old Norse, while the former name of 'Spitsbergen' comes from Dutch, meaning 'jagged mountains'. The islands were an international whaling base for centuries, and while it is legal under licence to hunt Ringed and Bearded seals in season, other seals and polar bears are protected.
Bird watching is an attraction for tourists to the islands, but people also come for the flora, and scenery, ice and history. And, of course, the pinnipeds, which include walruses, Ringed and Bearded seals as well as Harp, Hooded, and Harbor seals. 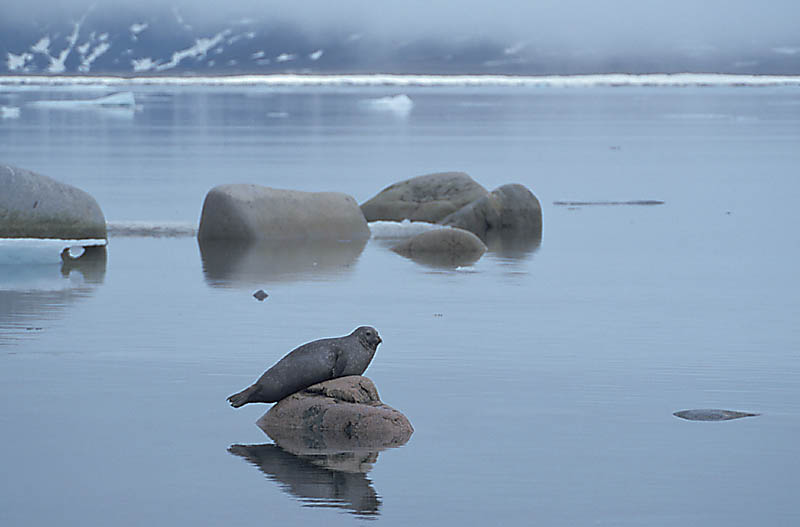 The east coast of Iceland has a gentle, undulating coastline, unlike the dramatic west. The fjords and bays have provided excellent habitat for seals and harbors for those who would hunt them. The harbor seal is the most common seal in Icelandic waters, and harvesting them has been a mainstay of Icelandic survival and commerce for over 1000 years.
Although the advent of modern motors and guns has likely been the cause of the rapid decline of the seal population in the last 100 years, on the east coast, at least, development such as the enormous Alcoa aluminum smelter has offered employment more lucrative and reliable than pursuing harbor seals.
Most likely the tide is coming in, as only one of the animals is resting on a visible rock. They tend not to wait on rocks hoping the tide will go out. 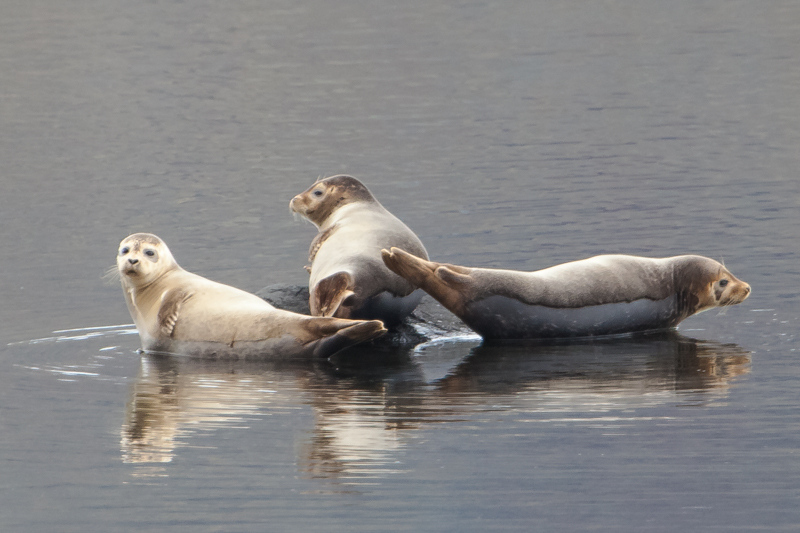 Within the Skagerrak, the strait between Norway, Sweden, and Denmark which opens to the North Sea, Kosterhavet Marine National Park - Sweden's first - was created in 2009. A popular tourist destination in the park, the Koster Islands have extensive recreational opportunities, including seal watching during the midsummer pupping season. Regular tours include the lighthouse of Ursholmen, near to the haulout shown in this photo.
Note the small seal in nursing position in the center of the image. Over half the harbor seal population in the Skagerrak was wiped out by infectious disease in the 20th century, and recurrent phocine distemper and influenza remain continuous threats. 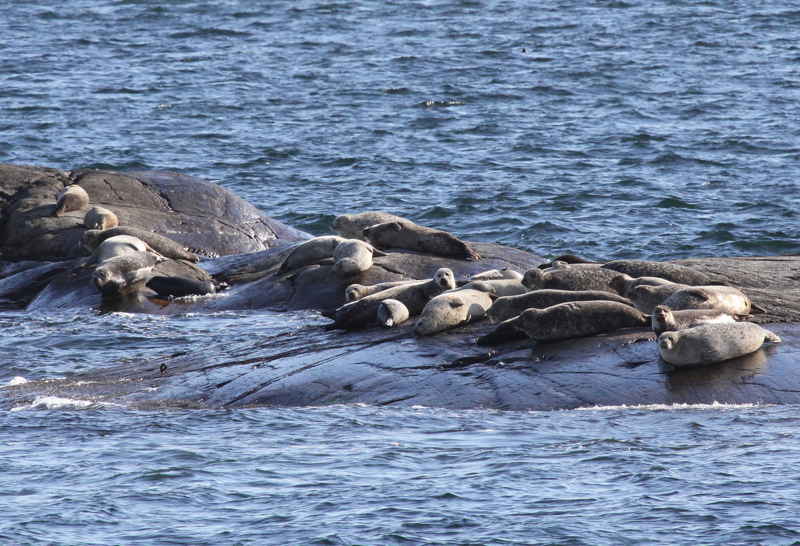 Although conflicts with fisheries remain an issue for the Swedish 'knubsal', the harbor seals of this island off the southwest coast live in the waters of a nature reserve owned by the Church of Sweden. While there are no permanent residents on the island, plentiful birds, old-growth forests, summer beaches and rental houses bring visitors.
Sweden adopted a Seal Management Plan in 2012, but 'Information and cooperation as a tool to make a better understanding between fishery and conservation is one challenging goal', according to the Helsinki Commission.
Yes, that's a gray seal (Halichoerus grypus) in the group, typically uncommon in the area. 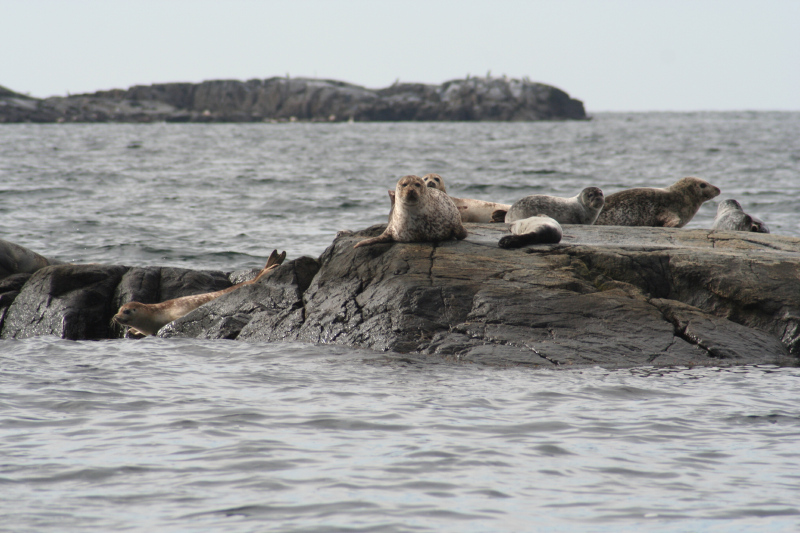 Off the coast of South Jutland, Fanø is a North Sea island ringed with sandy beaches. It is opposite Esbjerg on the mainland, where the Fisheries and Maritime Museum maintains a Sealarium, which displays gray and harbor seals, and rescued stranded wild ones prior to the Bonn Convention.

Photo by Carsten Strecker
Given to the public domain. 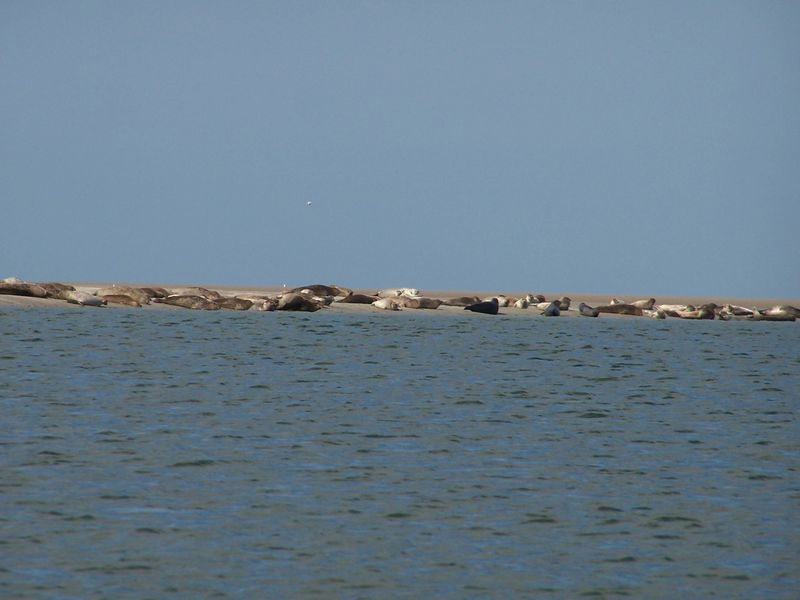 An island in the Wadden Sea in northwestern Germany, where significant numbers of seals have died from PDV. Nearby 'Seehundstation' carries out rescue and rehabilitation efforts as well as research and public education.

Genetically distinct, Baltic harbor seals only survive in the Kalmarsund region in Sweden. Severely depleted by an extermination campaign in the early 20th century followed by a PDV epidemic, the numbers are now increasing, with new sites recolonized in recent years, according to Tero HÃ¤rkÃ¶nnen and other researchers. They were originally found along Baltic coasts and islands of Sweden, Estonia, Poland, and Germany, but no further north than the major Estonian islands. In 2013 Helsinki Commission counts showed around 800 individuals remaining.
One of the earliest Mesolithic villages was established on the Swedish island of Ãland about 8,000 years ago, and their descendents no doubt took advantage of the likely abundant seal resource. Today, the nature reserve of the VÃ¤rnanÃ¤s archipelago shelters around 150 harbor seals on small, flat islands and skerries in the Kalmar Strait. Access is restricted to much of the area during most of the spring, summer, and early autumn.
Kolbodabaten offers Seal Safari boat tours (SÃ¤lsafari in Swedish) from early July to late August, with a respectful attitude and groups limited to 12 participants. They report that "10-20 seals on a small islet is not uncommon" and that they are "social and playful".

Harbor seals are extremely rare along the Polish coast and waterways. If they are sighted, most people do not even have a word for them ('fokapospolita' in Polish), other than popular nicknames such as Mottle, Speckle, or Dot, given to specific individuals when they appear.
In 1990, a harbor seal birth was reportedly observed at the 'Birds Paradise' Nature Reserve ('Ptasi Raj') near Gdańsk, at the mouth of the Vistula River, according to Prof.Skóra.

These 'common' seals, also referred to as 'harbour' seals in Scotland, were hauled out off the Seal Rescue Centre at Kildalton, Isle of Islay.

Photo by George Middleton
Save Our Seals Fund
Used by permission. 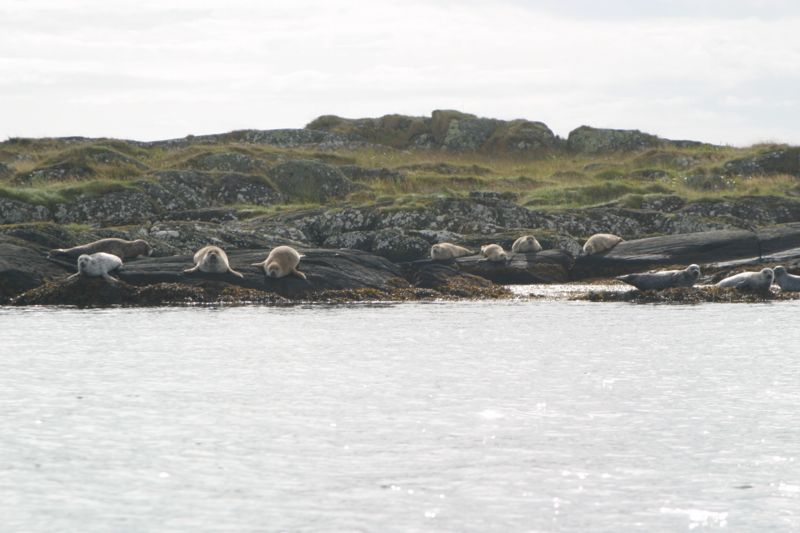 The photographer reports that 'the seal population in this part of Ireland is very healthy,' and that hunting them is illegal. This photo was taken from a ferry, and the seals are apparently 'used to humans due to the large amount of sea traffic in the area.'
He adds, 'When I have been out in my dinghy the seals will play chase and follow us back to the pier!'
A decade after this photo was taken, extreme storm-stranding events have been happening, and even healthy seals are requiring assistance from Seal Rescue Ireland.

Photo by 'Moward'.
Used by permission. 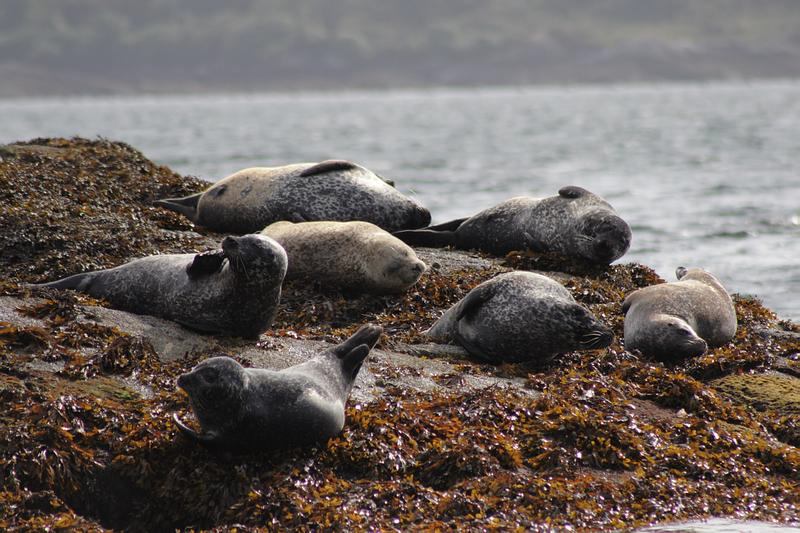 This colony off the SE coast of England near Kent is adjacent to large human populations, yet is mostly unknown. That pups have needed to be picked up here by British Divers Marine Life Rescue strongly suggests that disturbances are occuring. 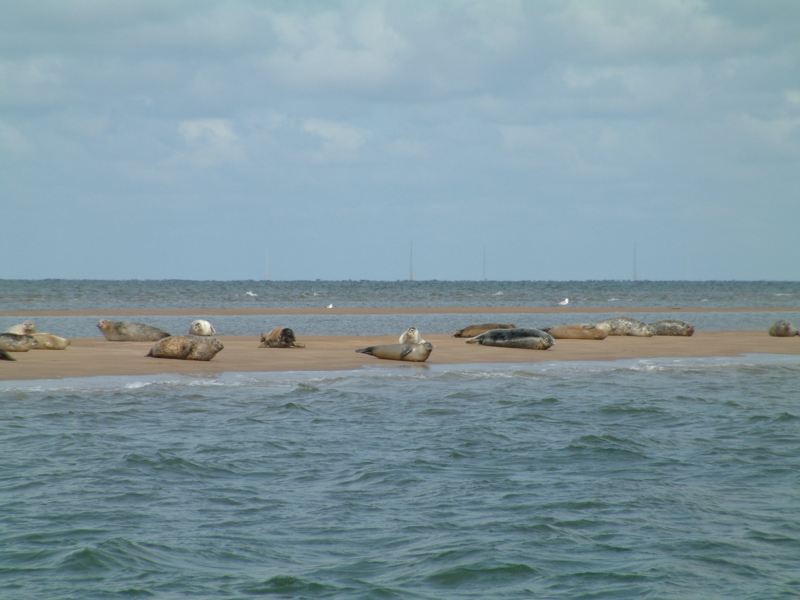 The site of the Netherlands' first national park, Schiermonnikoog is virtually car-free, but receives nearly 300,000 visitors a year. Drawn to the small barrier island by its wildlife and recreation, they often find harbor seals at the water's edge.
Of the countries along the Wadden Sea, the Netherlands accounts for the most rescued, rehabilitated, and released harbor seals. Despite recurring PDV epidemics, the seal population is growing as hunting is forbidden and suitable haulouts are plentiful. Tidal patterns have moved low-lying islands such as Schiermonnikoog over 2 kilometers in less than a millenium, but the seals simply follow, tide by tide.
Unlike many populations in other parts of the world which ordinarily neither migrate nor move long distances, recent satellite tracking shows that some Wadden Sea harbor seals frequently travel to the North Sea. As this may be due to reduced abundance of fish, the proper course for conservation is unclear. The expansion of wind farms, gravel extraction, etc., may be 'anthropogenic' factors far more harmful than rescue and release efforts currently discouraged by the Bonn Convention between Denmark, Germany, and the Netherlands. 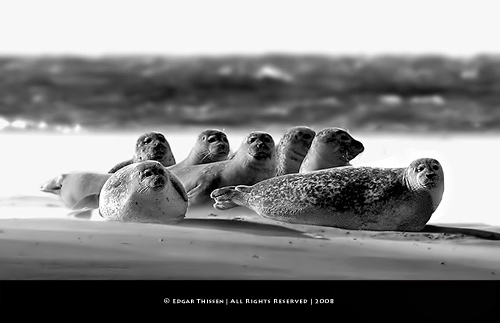 While there are no recognized harbor seal colonies along the North Sea coast of Belgium, groups of seals from time-to-time can be found in favored haulouts. This one, by the De Doornpanne Nature Reserve in the Oostduinkerke/Koksijde region of Flanders, hosts seals predictably enough that it is a tourist draw.
The status of harbor seals in Belgium is monitored under the auspices of the Management Unit of the North Sea Mathematical Models, abbreviated to MUMM, although stranded animals are to be reported to the Blankenberge Sea Life center. MUMM says on their website that if fishermen report a marine mammal tangled up in their nets, 'These reports are treated with complete discretion, where necessary.' 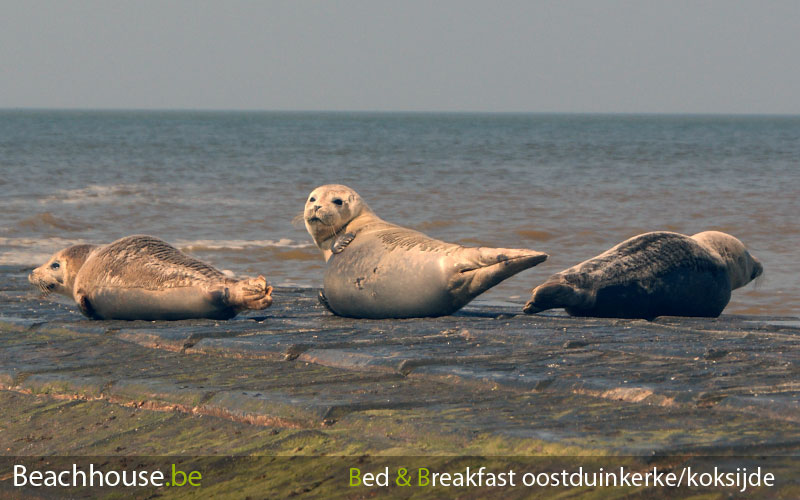 The Bay of Somme, on the northwest corner of France in the region of Picardy, with vast stretches of mud flats, dunes and beaches, is home to the largest harbor seal colony in France. The most extensive estuary in France, its opening on the Channel is over 5 kilometers wide.
Visitors to this popular tourist destination are treated to the sight of salt meadow sheep as well as seals. The harbor seals nearly died out in the 1950s, but 'protective measures' are credited with the restoration of a healthy population within the Baie du Somme Nature Reserve, noted for its bird-watching opportunities. The seals can be seen from observation points between Le Hourdel and Cayeux-sur-Mer, and on walking tours offered by tourism resources in the area. 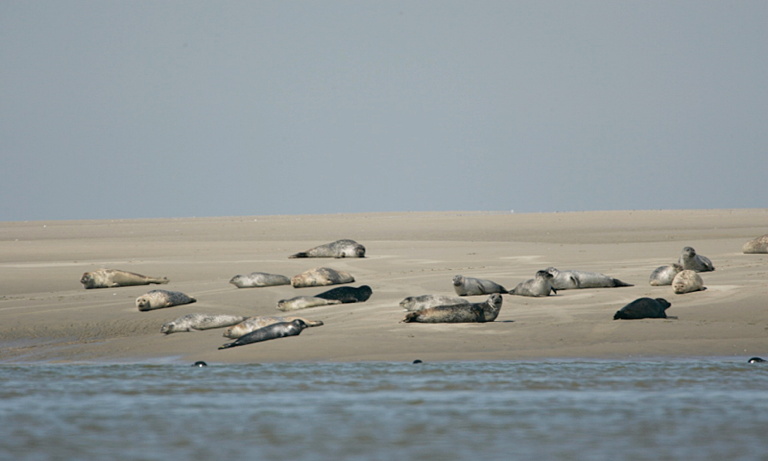 The "Rías" of Galicia are deep estuarine incisions into the granite shores of northwestern Spain, reminiscent of the fjords of Scandinavia. At the northernmost tip of the Iberian Peninsula, where the Atlantic Ocean meets the Cantabrian Sea, the Sor River (Sor Mañón) empties into the the Ría do Barquiero where this seal was found.
The Sor is the only river with salmon in Galicia, since unlike the others it has not yet been dammed to form a reservoir for hydroelectric generation. Accordingly, it's likely a beckoning spot for harbor seals journeying from the nearest reported colonies in France (see above). This photo was provided by A Coordinadora para o Estudo dos Mamíferos Mariños (CEMMA), which is the subject of a recent Cheer on this website. 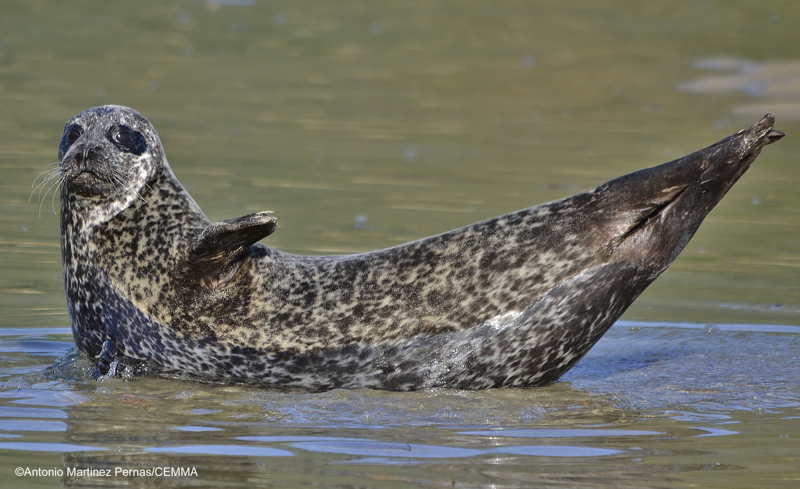