Although harbor seals have been found as far south as Florida along the western shores of the North Atlantic, the range of the subspecies Phoca vitulina concolor is generally considered to be from the mid-Atlantic states of the US to Greenland. The eastern coast of North America tends to be a gentle one as compared to the numerous cliffs and canyons of the west, with many sheltered bays and level haulouts suitable for seals.

Competition pressures from fishery harvesting have perhaps been strongest along the coasts of Canada's Maritime provinces, in addition to native subsistence hunting further north. The primary areas for conservation and rescue/rehabilitation efforts are in the more industrial US states.

Photos are presented here from states and provinces - where available - in order from south to north, with images being sought from Maryland, Connecticut, New Hampshire, and the Maritimes.

Harbor seals have been making a comeback along the southeastern Atlantic coast of the US. This photo from a state park in South Carolina, documents the only sighting in 2003. Prior to 1994, there were only four records of seals seen in the state. 'Since 1994, when the National Ocean Service in Charleston, South Carolina began recording sightings, there have been 26.' - NOAA/NOS Center for Coastal Environmental Health and Biomolecular Research; McFee/Zolman 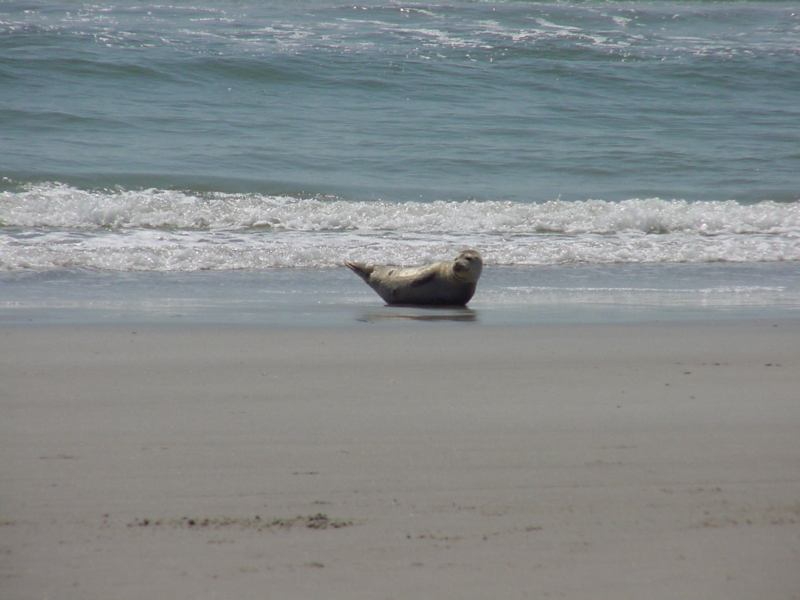 Until the last decade, Harbor Seal sightings along the Delaware coast were uncommon. But more recently, they are seen in many of their historic locations including the Chesapeake Bay, despite the expanded human use of these areas. Most likely the result of the Marine Mammal Protection Act and the increased public awareness of their need for conservation, Harbor seal visits appear to be starting earlier in the year and lasting longer, with a peak from February to April.
With 150 to 200 sightings in years reported to the Marine Education, Research and Rehabilitation Institute in Lewes, up to 25 percent involve animals that require immediate attention from some of MERR's dozens of volunteers. Working with NOAA and others, they provide rescue services and rehabilitation facilities for injured, diseased and stranded seals that are unlikely to survive without help.
Their popular support in Delaware is extensive enough that the state Department of Motor Vehicles offers a MERR-themed license plate! 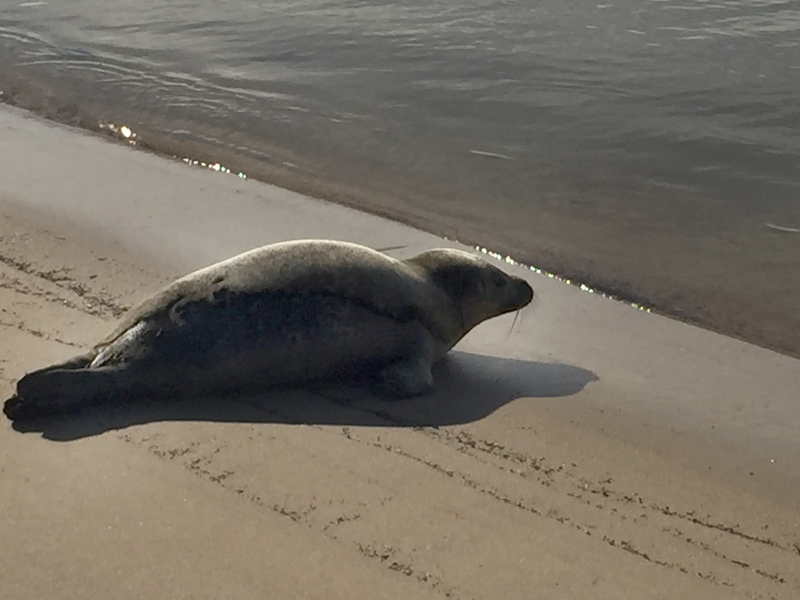 Sandy Hook has New Jersey's second-largest harbor seal haul-out site, according to the Foundation, with up to 95 seals having been seen at a single time in the area. Seals have been observed on the bayside and ocean beaches, as well as along rocky shorelines and on floating patches of ice in the Bay. The Foundation has partnered with Jenkinson's Aquarium in Point Pleasant Beach to produce an excellent 'digital story map' entitled Harbor Seals of New Jersey, which is linked to the right. 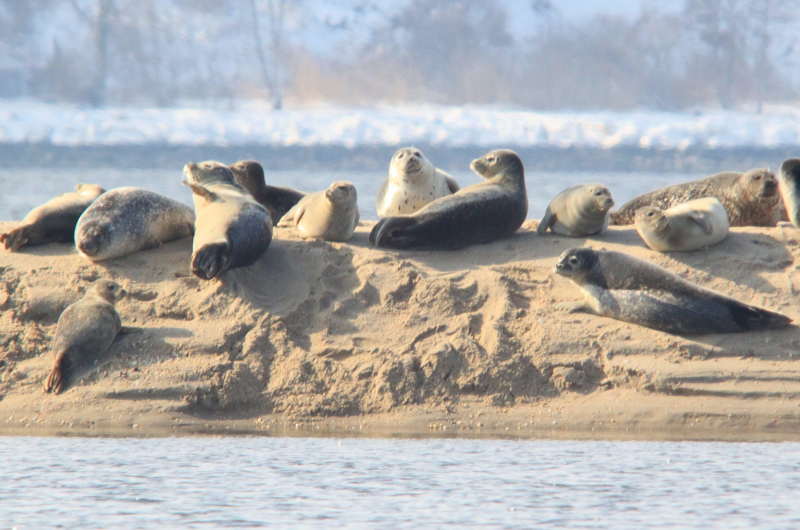 Likely to be seasonal migrants from Maine, one member of this group was seen with a radio tracking transmitter glued to its head by a rescue/research institution. 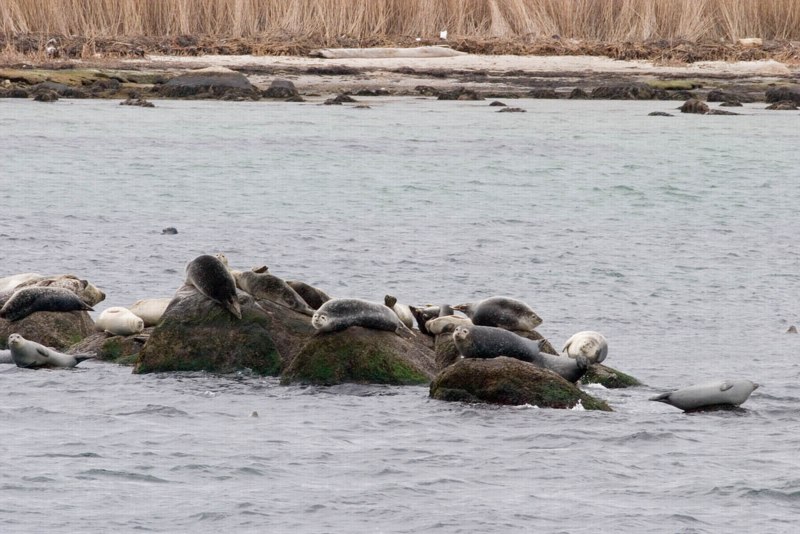 Rhode Island is annually the winter home for many seals from Maine and the Atlantic Provinces of Canada. There are around 15 haulout sites in Narragansett Bay, where this photo was taken on a Save The Bay Seal Watching cruise. Annual counts in the Bay have recorded up to 268 animals on a single day, with the number increasing after the passage of the MMPA -- and the ending of a bounty. This group was found just under the Newport Bridge, approachable only by boat.

Photo by 'RI_Drifter'.
Used by permission. 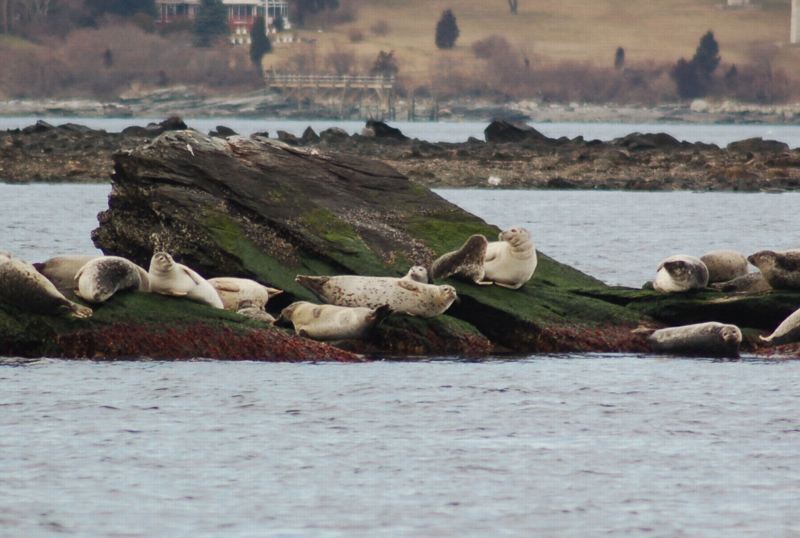 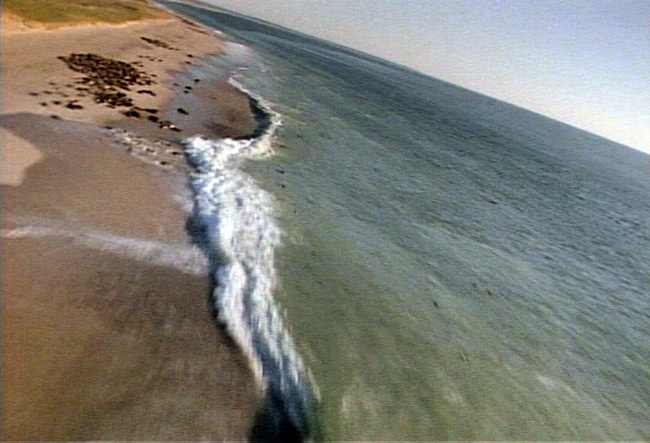 Image taken during the 2012 harbor seal survey, necessary under the Marine Mammal Protection Act to determine the health of the Western North Atlantic Stock of the subspecies concolor. Current data (such as 2012) are not sufficient to determine either a Minimum Population Estimate or a Current Population Trend, although the numbers do appear to be increasing. 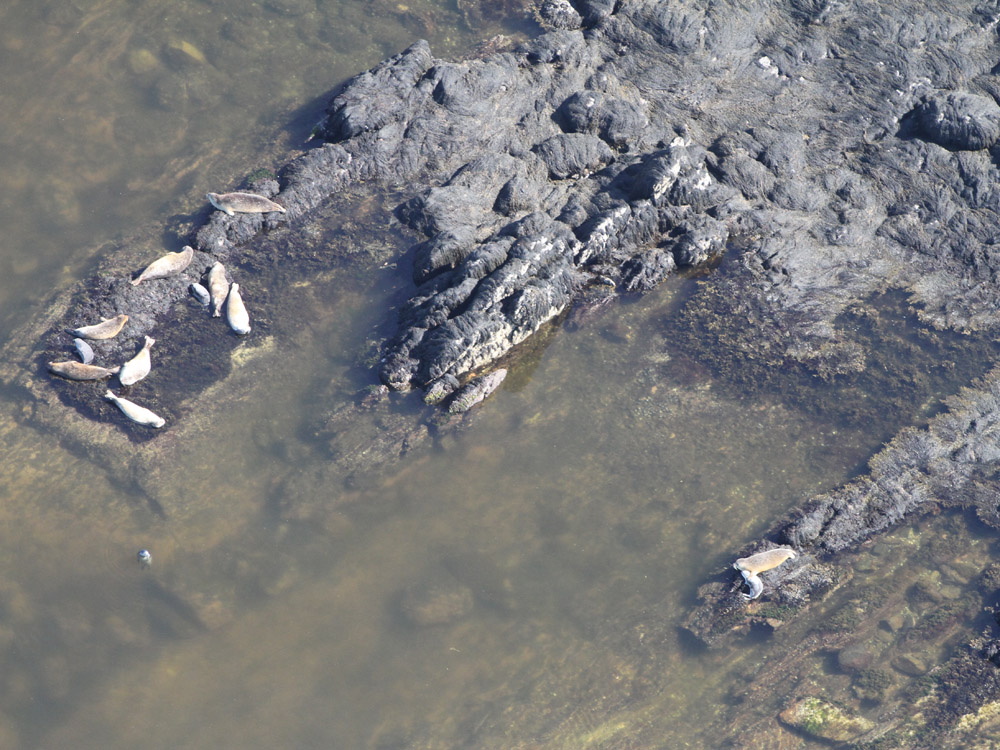 Our first image of a haulout in the Canadian Maritimes, this photo was taken through a viewing telescope provided by the Seaside Adjunct of the Kejimkujik National Park.
That the seals would stay so far from the shore is not surprising, given the hostility many professionals in the Canadian fishing industry feel towards any pinniped. 'Nuisance' seals are routinely killed, with no record kept or responsibility to dispose of the carcass.
'Seal watching' is, of course, advertised for kayaking, cabin rental, and boat tours in the area, part of the fabled Novia Scotia South Shore. The Snowy Plover in the same region is protected by law, and ardently looked after by birders.
Even at this distance, these seals are wary. 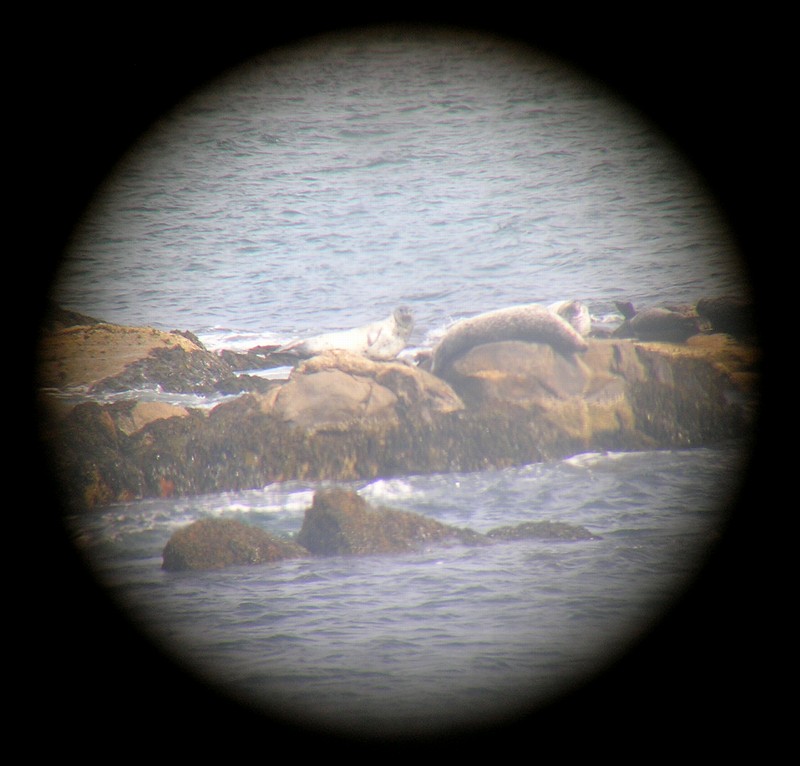 Harbor seals in this park have been analyzed for their 'aggregation' behavior at haulouts. One conclusion drawn by the British Journal of Animal Ecology was that 'No fighting advantage was found in larger size, but the first animal to land on the site was generally the winner.'

Photo taken in July 2005 by Danielle Langlois at the Forillon National Park in Quebec, Canada.
Used under a Creative Commons Attribution-ShareAlike license 2.5. 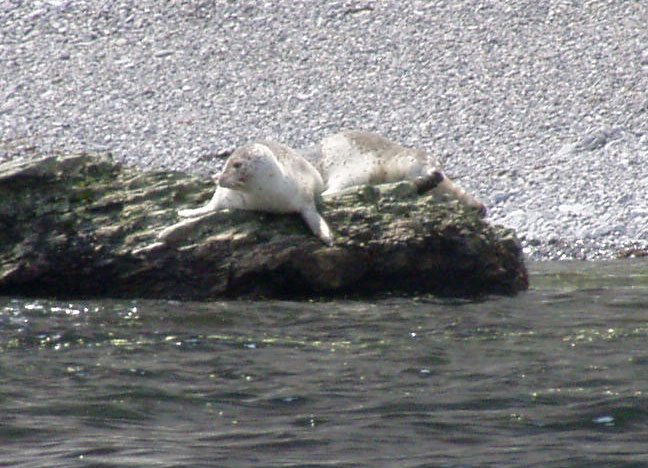 Although a haulout or rookery for the rare Ungava freshwater seal has yet to be found, the existence of this once disputed subspecies has been proven with this photo and the evidence gathered in the process of obtaining it. Encountered far inland from Hudson Bay, so not strictly a "Western Atlantic" population, its genetics are closest to that group. More about this discovery in our Cheers archive.

These seals, hauled out on offshore rocks near the Cape, are at what has been described as the 'windiest oceanic site in the world,' on the southernmost tip of Greenland. Even at the end of the short arctic summer, icebergs still pass near this coast.
According to a cultural history of the area, seals 'have for centuries formed the basis for human existence in the Cape Farewell area.'
Although their current numbers are so low as to place them at risk for extinction, the 2010 decision by the Greenland government to halt all harbor seal hunting until scientific evidence supports its resumption leaves room for hope of a resurgence.