California's coastline is over 800 miles long. Its entire length is within the ecological niche of the harbor seal. As a result of California's laws and regulations regarding public ownership of the "intertidal" zone, the very places that harbor seals would wish to use belong to the people of the state. And, with a commitment to public access to shoreline resources even through adjacent private developments, where seals want to be is also where people can go.

Where human disturbance is reduced by natural inaccessabilty or conservation regulations in parks and reserves, harbor seals have a chance to survive. The images on this page are all SealWatch.org photos, and are displayed in geographical order from South to North.

On the southern end of the Monterey Peninsula, Pt. Lobos is a dramatic, rocky, wave-battered stretch of wild Pacific coastline. Harbor seals, elephant seals, and sea lions haul-out to rest on its beaches and rock points, sharing the fertile fishing waters with sea otters. 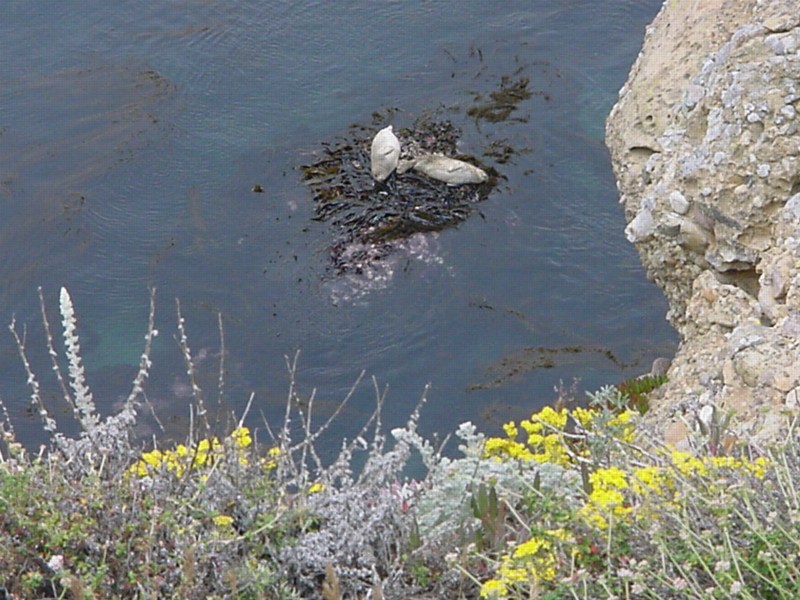 Elkhorn Slough divides into mult-branched arms once it leaves the coast, inspiring its name. Once diked to provide agricultural areas, it now supports a vast array of wildlife, including harbor seals. otters, pelicans, osprey, and much more. Coming to see them on kayak, pontoon boat, and foot are outdoors enthusiasts and school groups. 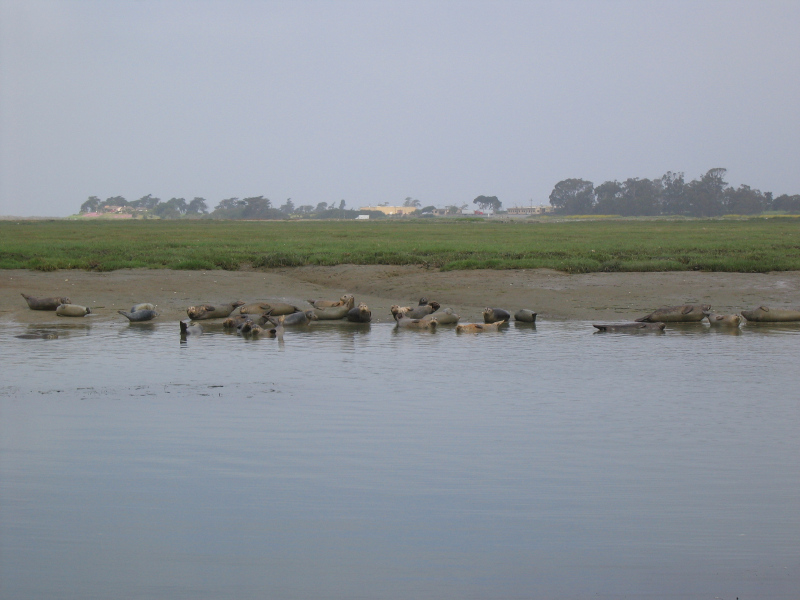 Pt Bonita is visible from San Francisco across the Golden Gate. Historically disturbed by ranching and then military activities, the area became part of the Marin Headlands unit of the Golden Gate National Recreation Area. With the eventual closure for public use of the beach directly below the lighthouse trail, the harbor seal pupping which had begun to resume expanded tremendously. This website was initially created as part of a successful attempt to protect this colony. 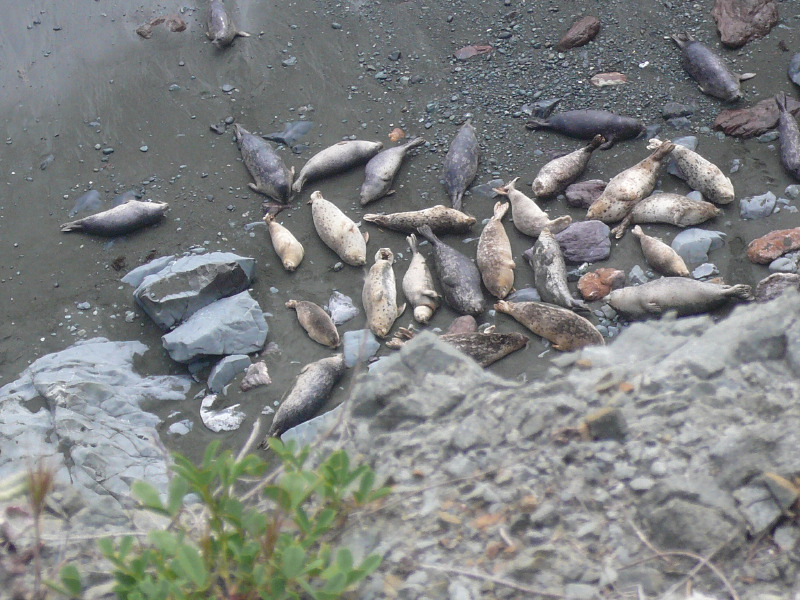 Bordered on one side by an exclusive, gated seafront development, on another side by a community that wishes to be so private they remove road signs pointing toward their town, and on the third side by California's busy scenic Highway 1, Bolinas Lagoon would seem a hard palce to be a harbor seal. But the tidal mudflats are ideal for hauling out and as rookeries for pupping, and the waters are rich in fish. Except for now-rare disturbances by kayaks, more frequent loud motorcycles, and the occasional long-distance fishing cast, they're doing well. 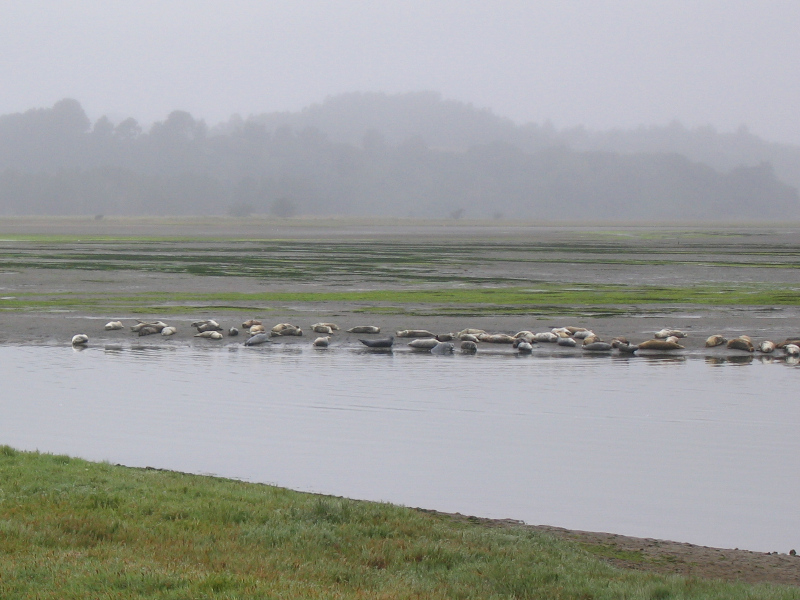 Drakes Estero is the largest estuary on the California shoreline, and is the birth pace for perhaps one-quarter of all harbor seals in the state. Unfortunately, it has also been a place where oysters were farmed before the entire estuary became designated a Marine Wilderness. The difficulties the Department of the Interior have had in enforcing that designation have been resolved by the U.S. Supreme Court, and the Estero is now free of industrial aquaculture. 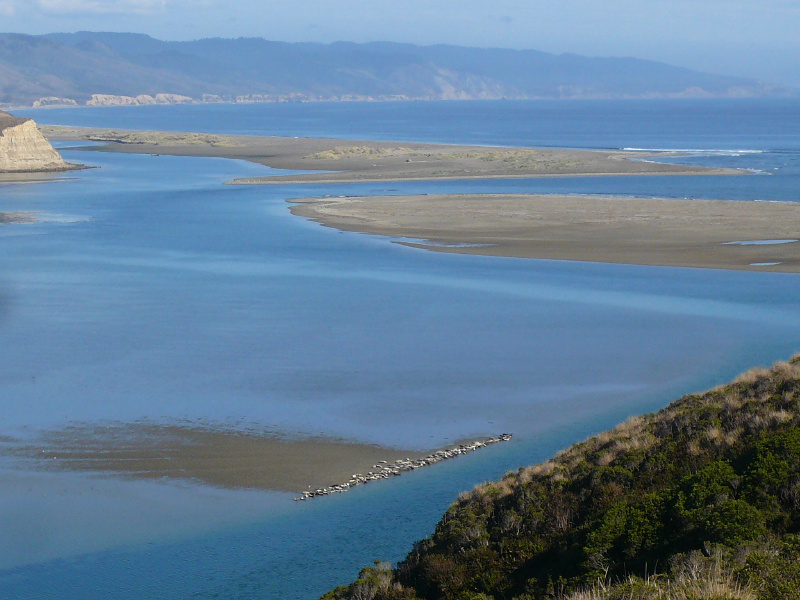 At the mouth of the mighty Russian River, the enormous, ever-changing sand spit provides excellent habitat for harbor seals. The first Seal Watch program in the state was begun here in 1985 by what was then called The Stewards of Slavyanka, now Stewards of the Coast and Redwoods. It was volunteers from that first group who began this website. Yes, that's an elephant seal in the center, and his presence was problematic for years. 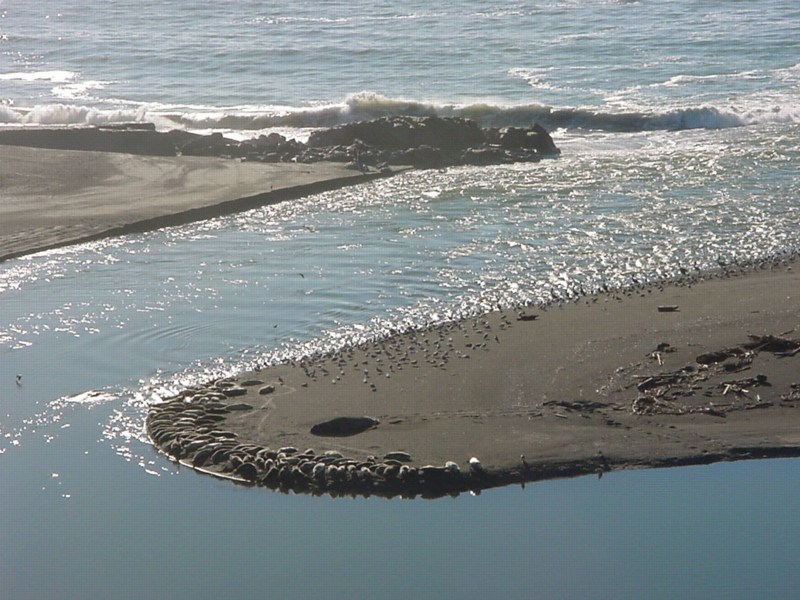 Salt Point was the site of an extensive sandstone quarry that provided building material for San Francisco. Whether harbor seals were a food source for the quarry workers is uncertain, but this colony is the most wary this photographer has seen. Despite the crashing of heavy waves next to the seals, the unzipping of a camera bag on the bluff above them caused several of the animals to startle and raise their heads. 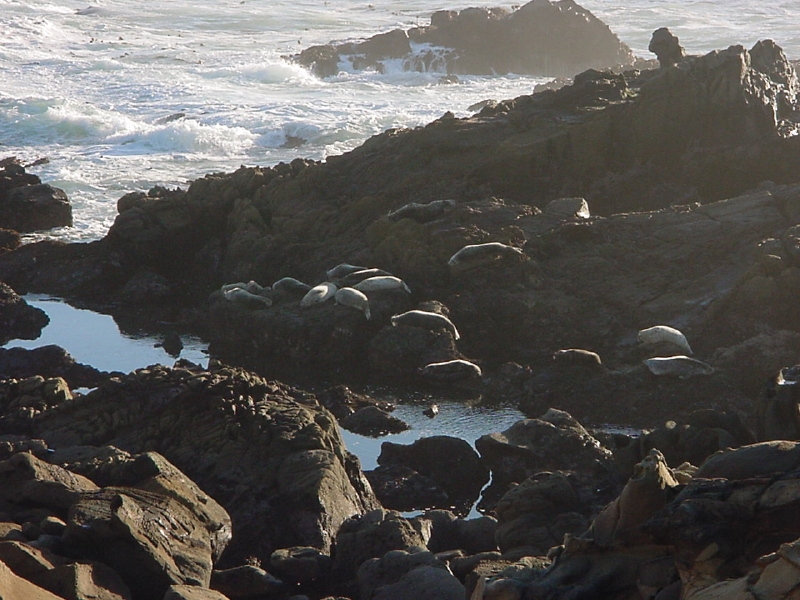 Taking this photo required crawling through tick-ridden brush. The 'red coat' female visible in the image - who is over a hundred miles outside of the range such animals are usually seen - gives birth to pups of normal color, according to volunteers who monitor this highly protected location. 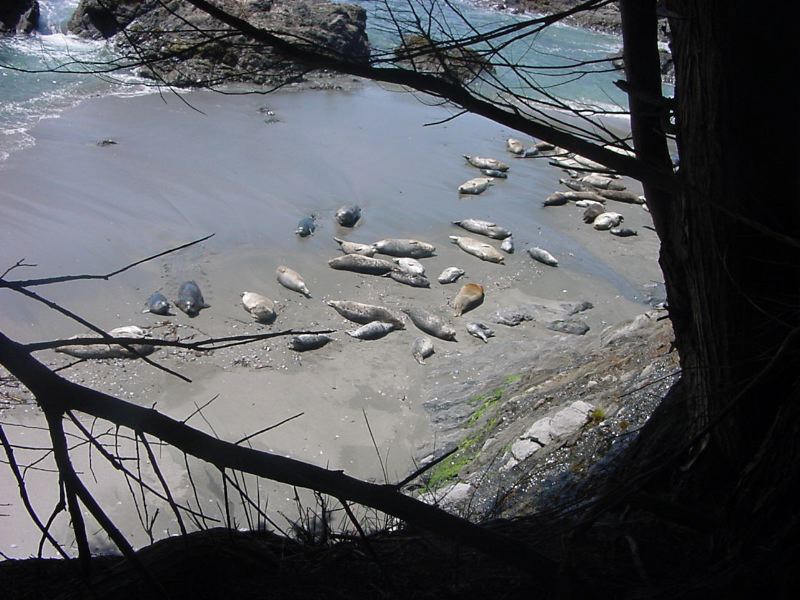 On the border between Sonoma and Mendocino Counties, the Gualala River has been touted as a possible source of fresh water for more southerly parts of the state. It is unclear how that might affect the river otters and harbor seals who feed in the lagoon that forms behind the spit which periodically closes the mouth of the river. 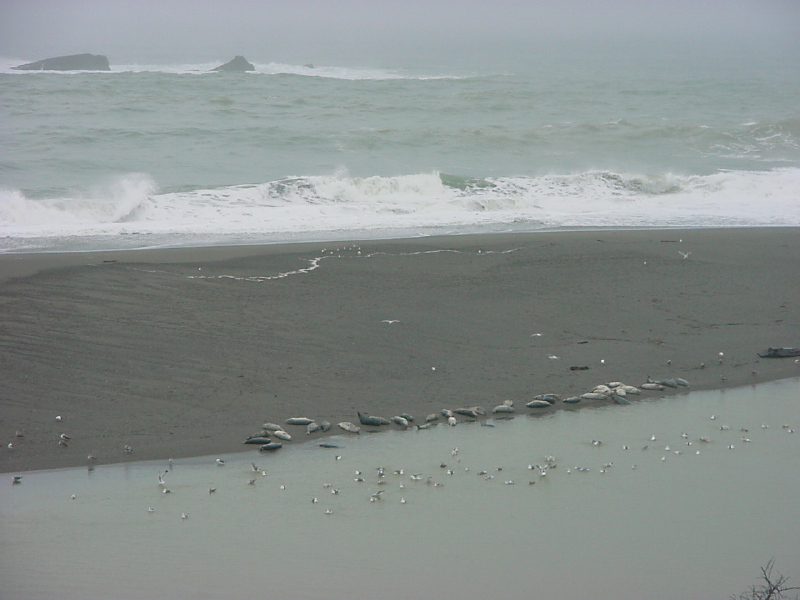